The Role of Lead Advisor

To lead people, walk behind them. (Lao Tzu)

In the aftermath of the 2008/9 market whacks, we have all felt the erosion of trust. However, in many cases, this lack of trust may be putting investors at risk; specifically when a client decides to subdivide their portfolio among 2 or more advisors in hopes that they will reduce their exposure to poor performance.

In a recent report (for investment professionals only) published by SPDRÒ University and [email protected], a healthy discussion was presented regarding the need to identify an advisor to play a leading role in oversight of the entire portfolio in the pursuit of client objectives. Specifically, the conclusions were drawn from a survey of more than 800 investors and 2,000 advisors. Select points from the survey were as follows:

At least some of the specific potential problems are that:

The survey also indicated that the most important attribute for a primary advisor (60% of the respondents agreed) was to "help guide a client's financial life from investment management to spending, tax planning, education planning, estate planning and generational wealth transfer".

So what should we do? It is clear that clients expect advisors (who are important to them) to pursue an in depth and holistic understanding of their lives. Further, this knowledge should drive the process we use in aligning our service with their objectives in developing our recommendations, communicating, teaching/educating, and helping to improve the quality and efficiency of their decision making process. It is also important to periodically evaluate our success (or lack thereof) from the client's point of view and perhaps take active steps to improve the collaboration among the client's advisory team.

Trust may be fragile, but it can definitely be renewed through the actions we take in support of our clients.

{Note: the MarketPsych tools and process initiatives are resources that have been designed to help advisors engage precisely those attributes described by the survey as important for primary advisors.}

Posted by Mark, The Advisor at 4:38 PM No comments:

"Our internal process is more important than anything else because it drives everything else."
This series of blogs will look at new behaviors we can create that give us additional investing and trading choices that positively impact our risk and profitability. The foundation for these Mind Muscles(tm) can be reviewed at:
http://blog.marketpsych.com/2009/11/golden-thread-across-canyon.html
http://blog.marketpsych.com/2011/02/mind-musclestm-in-minutes-experience.html
Each additional blog will introduce a market bias or mind trap and demonstrate a new behavioral skill that will give you a new positive response to market conditions.
***************
I recently gave a presentation to the "Insurer Investment Forum XI" in San Diego produced by Strategic Asset Alliance. One of the concerns of the investment arms of insurance companies is the increased potential for sudden market movement. 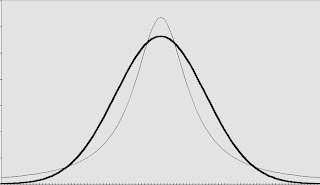 Risk is moving from a wider distribution and diversification to a more systemic concentration. This produces what statisticians call "leptokurtic kurtosis." This means more of the variance in price distribution is the result of infrequent and more extreme deviations, as opposed to more frequent modestly sized deviations. This means both a higher peak and fatter tails in event distribution.
The anticipation of more extreme events is driven by concentration of economic decision power. Let's look at the list of contributors:
How do we as money managers, investors and traders manage the potential for more extreme events?
Our neurology isn't made to conceive of and prepare for extreme events when things feel normal. Our minds want to extrapolate the nature of the current environment into the future, especially if we can't conceive of solutions to the problems brought by these extreme events.
They didn't see it coming!
Extreme Event Exercise:
The goal of this exercise is to build a Mind Muscle that gives us a new willingness to acknowledge rare events and to prepare for them as we see increasing evidence of their viability. It is one of my favorites to do with clients at longer workshops. The purpose of this exercise is not to predict the future or to replace risk management systems, but to prepare you mind to act quickly when needed.
Write down 5 events that although unlikely to happen, would significantly change financial opportunities, risks and profits for your industry or company. Make at least two of the event highly unlikely. For example, some of the events could be:
Make up your own!
The next step is to create a time line for each of the 5 unlikely events. What indicators would be likely to occur before this event happened? Even small early indicators. Label in days/weeks/months/ years before event. What other events would cascade from this event? What emotional contagion might occur creating mass hysteria? What feedback loops might get caught in an ongoing spiral?
This visualization will build new Mind Muscles, the ability to see events that few others will be able to notice. As these events unfold, you will have already been down that path. You will be able to see the end! You will not be frozen, but will have the ability to act.
This exercise will not only build visuals for specific events, but give your brain the ability to visualize consequences for additional events that you did not consider. 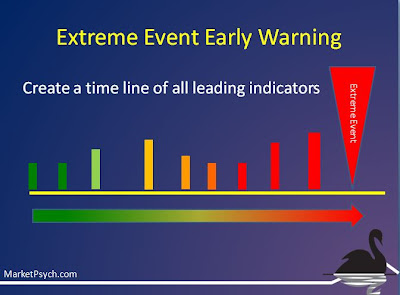 The next step is to create incremental early action plans as early indicators crop up on your time line. 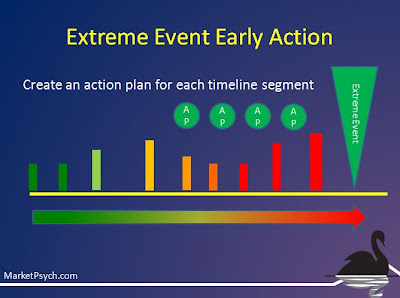 As your brain visualizes several unlikely alternatives, it will develop the capacity to see these and other unlikely alternatives develop. Our brains create patterns to make sense of the world. If there is no pattern, evidence of a changing landscape is hard to see. So, create more patterns, build that Mind Muscle(tm) and become more creative and decisive as we approach the next extreme event. As always, we at MarketPsych are ready to help you in this process with our in-house training.
Richard Friesen
[email protected]
415.488.6505
*************
Posted by Richard Friesen at 3:41 PM No comments: