We should set our sights on horizons we will never live to see. (Asian proverb: source unknown)

Two ideas in my recent experience have given me a new appreciation for longer term thinking (and in particular, my personal responsibility for the actions of others who will be impacted).

One emerged when Bernadette and I recently toured a family owned (and operated) balsamic vinegar farm in Modena, Italy. It had been in the family for generations. We toured the facility and learned how traditional artisanal balsamic vinegar is made; particularly that well aged variety over 25 years old. The taste of just a drop or two of the thick, syrupy older product produces a sensory experience that is exquisitely layered with deep and rich flavors. In truth, it has been infused with the experiences of multiple generations of the family and their lifelong work on the farm. I will never taste balsamic again without thinking about this particular family and their enthusiastic embrace of an artistic food dynasty. A few interesting observations resonated with me as follows:

1. It takes about 100 litres of liquid over the aging process, evaporation, and years to ultimately produce about a litre of final product.
2. Fruit starts in a larger barrel and as it ages, is moved into smaller barrels. The picture nearby indicates the evolution of balsamic through five barrels in a row that reflect a particular vintage year.
3. The fruits planted in one generation are actually cultivated in the next and harvested in generations beyond.

Obviously, in planning a business that, by its nature, is multigenerational in scope, the family is forced to think about who will succeed them to make decisions. As well, the current owners realize that they own the responsibility of shaping the character of their family and ultimately ensuring appropriate training for the job.

The second idea instance emerged through an excerpt from the book, Moral Intelligence 2.0 by Doug Lennick and Fred Kiel. It contained a reference to a State of the World Forum in which a presentation was made by a Polynesian tribal chief from Hawaii. In describing how his people thought about responsibility and accountability, the chief indicated that, in his culture, it was presumed that current leaders were accountable to the three generations that preceded them and responsible for the seven generations that followed them. Let that sink in for a moment. Not only were people expected to be responsible for their own actions, but in fact, had some obligation to include the rules and teachings of three prior generations in their current decision making, and the personal responsibility for identifying and teaching their successors in a way that influenced the next seven generations.

I suspect that most of us would have difficulty (and perhaps some sleepless nights) believing we were responsible for 11 generations. However, I do also believe that there is unusual value in considering how our personal actions and decisions reflect the views and moral teachings of those who preceded us. Additionally, even modest amounts of effort to enhance the capabilities of those who will succeed us will undoubtedly have a major impact on our communities both near and far.

As we think of recent couple of years of market whacks that reflect short term thinking, and perhaps myopic greed, I suggest we ask ourselves (and those close to us) questions arising from a longer term perspective. Most importantly, we should remind ourselves that we are more responsible for others than we might think.

Mark, the Advisor
Posted by Mark, The Advisor at 11:21 AM No comments: 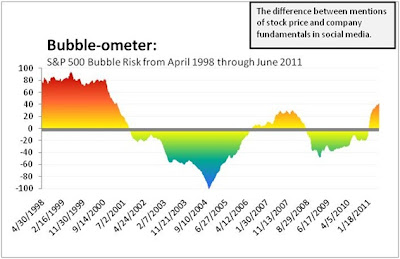 For a talk earlier this week I reproduced our "Bubble-ometer" first profiled in Fall 2010 for the period from April 1998 through June 22, 2011.  It turns out that based on this simple metric of the number of mentions in financial social media of stock price action versus the number of mentions of company fundamentals (speculation versus thoughtful investing), we're likely in the midst of a speculative bubble.

PSYCHOLOGICAL PROFILE OF A MARKET TOP


To figure out a basic profile of market tops, we studied social media language predominant in the two weeks around seven recent market peaks:
SENTIMENT CHARACTERISITICS OF A MARKET TOP
WHAT TRIGGERS THE IMPLOSION OF A BUBBLE?
SIGNIFICANTLY:  Outlook (beliefs about the future) diverge from actual events (reality) at a peak.
In most cases, prices start to fall, but Outlook remains positive until surprising negative news collapses the Outlook vs. Reality disconnect.  Joy gives way to worry and doubt.

ARE WE AT THE PEAK OF A COLLAPSING SPECULATIVE BUBBLE?
Most importantly, did we see a market peak this April?  Suprisingly to me, the data suggest yes.
I'll keep working on the research, but the preliminary results indicate the next year is unlikely to be good for long-only investors.  Sign up here to keep abreast of our research via our free newsletter.

I was just at the Battle of the Quants in London last week, moderating a panel on the use of social media data in predicting stock prices.  A number of funds are doing this, including our own fund (MarketPsy Long-Short Fund LP) which did it successfully for 2 1/4 years.

On the panel were several interesting groups, including the "Blog Fund" - Pluga AI run by Yutaka Matsuo, a machine learning and AI expert at the University of Tokyo.  Also the "Twitter Fund" run by Paul Hawtin at Derwent Capital, Arnauld Vincent from Mines Paris Tech, Kevin Coogan from Amalgamood, and Axel Groß-Klußmann from Humboldt Univeristy in Berlin.  All in all we had a lot of fun.  Our own data is available at www.marketpsychdata.com 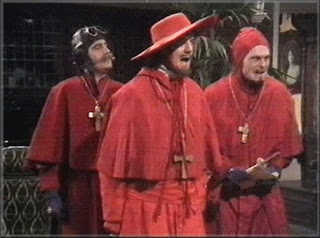 We've blogged about it before.
It's a bonafide MarketPsych pet peeve, the financial equivalent of watching someone chew with his mouth open or say, "irregardless".
What will it take to keep people from being "surprised" at "unexpected" results from noise-laden, short-term indicators (I'm looking at you, Jobs Report) comprised of 33% data, 33% speculation and 33% magic pixie dust?
This article by Randall Forsyth at Barron's says it quite well.
Of course, we have been making this point for a long time, here for example.
Now if you'll excuse me, I have to stop blogging now so that I can find a brick wall and bash my head against it repeatedly.
Happy Investing.
And hey... let's be careful out there.
-Dr. Frankenstocks