As we age, our financial decision making changes.  And more often financial advisors are being held liable for their clients' (impaired) decisions.

The MarketPsych team created the MEMRI script, described in this AdvisorOne article by Savita Iyer and in its full version in this pdf to help advisors improve client service.

A short and light Fox News report on trading on social media (and the data we generate for funds and banks) is here. They have some great stock footage of our friends Mike Waldron and Matt Pringle at Shoreline Trading!

We ran a hedge fund using our social media data from September 2, 2008 through December 31, 2010 - when we hibernated it due to lack of funding (despite the fund being up, it was difficult to raise money for it).  The fund beat the S&P 500 by 27% over that period.  We're planning to start trading again this summer.  Please contact us for more information through the Contact form at www.marketpsychdata.com.

MarketPsych Data analyzed Berkshire Hathaway's shareholder letters to determine who is most likely to be Warren Buffett's successor.  Our results, and an excellent article about the project, appear in Jason Zweig's column in today's WSJ.

Using our software, which specifically detects emotive words and relationships, we identified the individuals who Warren Buffett referenced most positively in the Berkshire Hathaway shareholder letters from 1995-2011.  Our software scanned for emotional references related to liking, being pleased with performance, and affection (what we called "Super-Positive") and references of a generally positive nature (what we called "Positive").

For individuals with more than eight sentiment-associated mentions in the shareholder letters, these two were the most positively referenced:
TONY NICELY (CEO of GEICO)
DANNY GOLDMAN (Venture capitalist - formerly CFO at Iscar)

For individuals with more than four mentions but less than eight, these two stood out:
JACOB HARPAZ (CEO of Iscar)
GRADY ROSIER (CEO of McLane Company)

So while we don't know who Buffett's successor will be with 100% accuracy, we do know that the above four individuals received high praise from Warren Buffett in his shareholder letters.

Check out marketpsychdata.com for more information about our market-leading financial textual analysis research.

To shorten the length from idea to recommendation, we are launching a weekly newsletter which will give you specific investment recommendations and less commentary.  Click and fill out to receive our FREE weekly investment strategy newsletter (if you already requested the Newsletter, then this step is unnecessary).

In addition to our usual haunts of New York and Los Angeles, we will be speaking in Atlanta (Socionomics Summit), Las Vegas, and San Francisco in April and May – we’re look forward to catching up with our friends in those cities!

We’re hosting a one-day Optimize Your Investment Psychology training in London’s Canary Wharf on June 19th, 2012.  We will help you improve the performance of the most essential component of your investment decision making - your mind.

We deliver keynotes and trainings globally, and going forward our good friend Derek Sweeney at the Sweeney Agency is handling our bookings: [email protected], +1-866-727-7555.

We also do many free educational talks.  Dr. Frank Murtha recorded this webinar on Conflict Management for the CFA Institute in late March: Dr. Murtha’s CFA webinar.
After my medical school research into bubbles in 2000, internet investment chatter continued to proliferate, and sophisticated predictive analytics software became available to the masses.  To capture these trends we wrote software to download all the social media discussions (and later all media and text about businesses) on the web.  We identified expectations and emotional expressions about individual companies in these conversations, such as the level of positive expectations around Apple’s (AAPL) share price.  Our analysis has now expanded to monitor over 1,000 influential factors including sentiments and macroeconomic variables in conversations about companies, countries, commodities, and currencies.

Recently we decomposed those factors into the ones prevalent at bubble tops, but not prevalent at bubble bottoms.  We studied 6 bubbles in our sample (internet, housing, oil, and others).  Using our bubble profiles, we created a probabilistic measure of the presence of bubbles in different asset classes, based on how people are speaking.  For example, when positive expectations jump far ahead of reality, and when anger and fear are very low, we are likely to be in a speculative bubble.  We combined 20 such factors into our “bubbleometer” index.  See below for the 2-year Bubbleometer of the S&P 500: 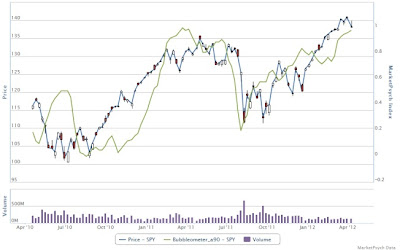 Sure enough, this indicates a short-term sell-off is imminent.  And lo and behold, due to the long production cycle of this newsletter, it already started!  But never fear, you can sign-up for our weekly newsletter or use our free web services at www.marketpsychdata.com/tools/ to track sentiments and securities of interest (updated daily).

Apple has been in the news a lot lately – “Will it be the first $1 trillion company?  When will the stock price hit $1,000?” - are common refrains in the blogosphere.

And sure enough we see the psychological hallmarks of a bubble around AAPL.  See chart below. 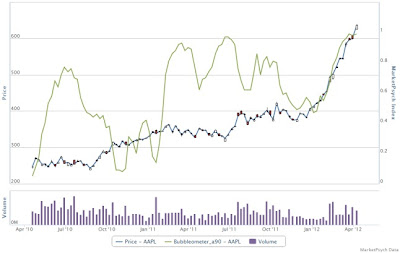 Yet I believe that “this time is different.”   Based on the Bubbleometer, AAPL is at its 2-year Bubbliest.  So a short-term a correction is certainly possible/probable.  Yet the long-term fundamental story for AAPL is reasonable, and valuation (often correlated with emotion) is the best long-term predictor of prices.  Most people are inclined to think AAPL is bubbly because its stock is going up so fast.  But in fact, AAPL is a relatively cheap stock by traditional metrics (P/E ratio, price to book, cash flow, margins, and on and on).

So why do so many people think it is in a bubble?  For one, we all have a tendency to believe in mean reversion - “What goes up must come down” – which is a symptom of the Gambler’s Fallacy (thinking independent sequential events are mutually dependent).  “What goes up…” is true about objects that no longer have any momentum behind them.  But AAPL has more than momentum, it has its own fuel supply.

The other interesting fact about AAPL is how much money it is creating in paper wealth for investors in the United States (and the world).  In the past 4 months AAPL has added $200b in notional wealth to the United States equity markets via the appreciation of its stock price (about $700 per person), not to mention the economic efficiencies reaped by Apple’s products and the success of Apple suppliers.  Which raises an interesting - and important - question:  Could AAPL be single-handedly pulling us out of our economic slump?  If so, Steve Jobs, Jonathan Ives, Tim Cook, and the other A-players at Apple may have been our society’s best investment of the decade.  I hope we will produce more like them going forward.

Two weeks ago I moderated a panel of the hedge funds who are trading on text analysis and sentiment at the New York “Battle of the Quants.”  FYI, here is a video of an interview with me about sentiment-based trading strategies from that event.

Sitting in the audience during the “Extracting Sentiment From News” panel, my friend Richard Brown - Head of Global Data Products at Thomson Reuters - was asked about the future of news analytics.  He mentioned two hypothetical conversations read by news-crunching machines - one pessimistic and one angry.  Both are equally “negative” according to news-analyzing computers, but they generate very different predictions for the future: “a sad person is more likely to hurt themselves, while an angry person is more likely to hurt others,” he noted.   He’s absolutely right - regime change happens when people are angry (negative), but not necessarily when they are gloomy (also negative).

Once social anger crystalized in the Middle East, the Arab Spring began.  This is the rationale behind our detailed interpretations of emotive sentiments and topics from the news Our GovernmentAnger variable, which measure the amount of anger expressed toward the government, is currently highest for media reports about (it’s obvious) … Syria.  Next highest for GovernmentAnger are Sri Lanka, then Hungary, Israel, Bahrain, Turkey, Mexico, Nigeria, and the United States.

I noticed an interesting crowd reaction at the Battle of the Quants when Richard Brown mentioned sadness and anger.  The crowd froze.  The room felt uncomfortable.  And no wonder – the crowd’s reaction is likely innate – talking about emotion actually primes us to feel that emotion.  It is uncomfortable to talk about sadness and anger, because to relate to those words, we call up subtle memories of times we have felt the same – which is uncomfortable – our natural defenses shut down our processing – no more listening, perhaps some scoffing, and a wall of skepticism rises.  It is perhaps this reaction that, in my opinion, will keep emotive text analytics as a long-lasting source of alpha.  But no need to belabor the point about emotional priming, time to turn back to something joyful…BUBBLES!

Research has shown that anticipation of making money activates specific neural circuits.  We are emotionally primed – and our subsequent decisions are biased – after such simple acts as watching an emotional movie clip, reading a positive (or distressing article), or simply looking at our portfolio performance.  There is already evidence that pornography (sexy photos) change financial risk taking and emotional faces do so as well.

Vernon Smith shared the 2001 Nobel Prize in Economics for his creation of an experimental asset market bubble in the lab.  Smith found that experimental subjects will bid prices far beyond “rational” levels in his market environment.  A recent twist on Smith’s bubble-model at the University of California at Berkeley found that the emotional states of the participants influence prices even more (and those emotional states can be manipulated by emotional primes).  “Bubbling with Excitement,” a study by Shengle Lin, Terry Odean, and Eduardo Andrade indicates that seeing an emotional movie clip in advance of participating in an experimental market leads to increased risk-taking (bigger bubbles) and ultimately bigger losses for the emotional participants. 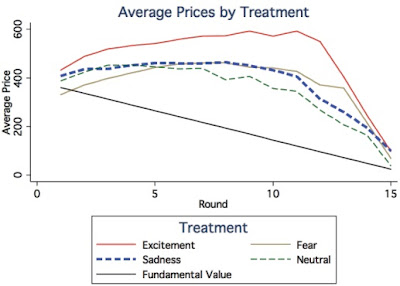 The U.C. Berkeley researchers are clearly onto something.  As noted above, we found that high levels of positive emotions (Joy and Love) and low levels of negative emotions (Anger and Fear) are correlated with Bubble tops (and price declines the following month).  Our findings mesh fairly well with this graphic developed by Westcore Funds and reproduced by Bank of American Merrill Lynch (where we obtained it).  In fact our findings have been discussed anecdotally for many decades: 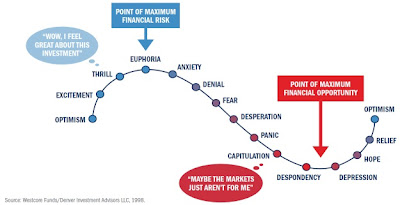 So where is the bubbliest talk now?  For economic sectors, we are seeing Bubble-talk from investors in Homebuilders, Energy, Environmental Services (waste management), and Social Media.
Interestingly, the countries we see with chatter indicating bubbly thinking include:  Myanmar (did optimism about political liberalization run ahead of itself?), Qatar (Can it be this good, really? Maybe so if you have the world’s 4th largest gas reserves), Netherlands, Peru, Dubai (a perennial bubble due to a testosterone-fueled refusal to stop building and admit defeat [Gentlemen, STOP the redundant construction already!]), and our warm and fuzzy neighbor to the north, Canada (Is their housing-bubble ready to pop as commodity prices fall?  Affirmative), and Singapore (a Chinese contraction would leave Singapore vulnerable).

We love to chat with our readers about their experience with psychology in the markets, so don’t be shy - we look forward to hearing from you!