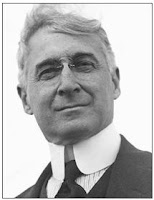 “All economic movements, by their very nature, are motivated by crowd psychology.”
~ Bernard Baruch

Bernard Baruch opposed the reparations terms of the Treaty of Versailles, knowing them to be impossible for Germany to fulfill following the destruction of WWI.  I wonder how Baruch would handicap recent events, as German taxpayers summon the will to bail out the near-defaulting states of Europe's periphery (or rather let those countries default and then bail out their own banks directly).

We're in psychological terrain - confusion, declining confidence, political gridlock - that sets us up for a real economic danger not only in Europe, but also in the U.S. - a developed-world debt spiral.  A debt spiral is a self-fulfilling prophecy of decreasing confidence leading to risk aversion, economic stagnation, and an ultimate debt default and/or collapse in the banking system.  In the psychological literature there are a few insights to inform us about what may come next and what we can do to prepare.

Please CLICK HERE to join us for our Free Webinar on "The Psychology of a Debt Spiral (and Positioning for the Next Stage)" on Monday, September 19 at 4:15pm EDT.

In this 20 minute webinar we will touch on the psychological side of issues driving the current crisis:
1.  What are the stages of a debt spiral?
2.  What is likely to happen to European sovereign (PIIGS) debt?
3.  Why financial stress goes on until "capitulation" occurs - even after fundamental uncertainties have been resolved.
4.  Solving a debt spiral:  The role of leadership, and how politicians can use psychological insights to improve confidence and the economy.
5.  The best investment positioning in this climate.

MARKET PLUNGE
We're facing more than a routine correction in the markets.  Despite excellent corporate earnings and 60-year lows in interest rates, equities have sold off sharply and are poised to decline further.  The reasons for this trap are fundamental to a tipping point, and past that point psychological drivers - such as loss of confidence - take over.
LOSS OF CONFIDENCE
This loss of confidence is reflected in the angry public mood in the and .  When angry, people blame  – some blame high frequency traders, while others blame the Fed, politicians, or even successful minorities or professionals (e.g., "bankers"). 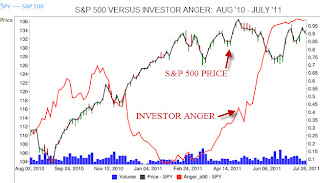 Chart of online investor anger (derived from social media linguistic analysis at marketpsychdata.com)
As investor anger grows, risk-taking and spending decreases.  In fact, simply being exposed to another’s anger reduces spending and financial risk-taking (Winkielman et al., 2005, Trujillo et al., 2006).  As a result, anger depresses a consumer economy and that country’s financial markets.
One result of anger is mistrust.  And if investors no longer trust the goverment to turn around the economy, then who can they trust?  This is the nagging doubt that ultimately collapses confidence and fuels a debt death spiral such as the one we are at the cusp of.
DEBT DEATH SPIRAL
In a debt spiral, increasing investor fear leads to decreased spending and investment, and thus a contraction in economic activity.  Due to the economic contraction, government receives less revenue and is inclined to cut back spending further.  Ultimately debts cannot be paid, credit collapses, and an economic depression ensues.
HONESTY IN LEADERSHIP
When confidence collapses politicians are forced to reveal, and voters are forced to confront, the truth about our current economic malaise.  The truth contains unpleasant information:  demographic time-bomb, underfunded pensions, public and private over-indebtedness, entitlement costs rising faster than economic growth, to name a few.
Naturally government officials (especially elected ones) are reluctant to speak honestly about the magnitude of the liabilities being faced nor to call for sacrifices.  This reluctance to speak openly is defended as not wanting to stoke more fear that could accelerate the debt spiral.  What we hear from politicians is characteristically benign – but does not address policies or procedures to deal with a debt default (which further weighs on confidence).
UNPLEASANT REALITY
Consider the estimated more than $100 trillion in future liabilities in the context of the current debt of over 80% of GDP.  Most developed countries cannot pay back the money they owe without major structural changes (immigration, high inflation, currency devaluation), and eventually many will either stagnate or default.  This has already happened in , and may happen sooner rather than later in other European states.  The default contagion is likely to spread to the and the within a couple years.
AUSTERITY VERSUS STIMULUS
Austerity will accelerate the “day of reckoning” since we already appear beyond the tipping point.  This is what accounts for the market’s declines following the debt ceiling agreement.  Fiscal stimulus is a "Hail Mary" - it will delay the day of reckoning and will stealth-tax everyone (except gold and some property owners) through inflation.    However, if the stimulus is spent on truly productivity-enhancing projects (broadband internet access, high-speed rail, electric car infrastructure, an energy-independence “Manhattan Project,” breakthrough applied basic science research), then it has a long-shot of succeeding.
RESTORING CONFIDENCE
To restore investor confidence, trust in leadership must be restored.  Honesty and forthrightness from leadership about our debts, with credible plans to address them, are necessary.  There are lessons from the psychology of addiction that will indicate when the current crisis has finally run its course.  The process of the economy and the markets hitting bottom is parallel to the idea of an addict hitting bottom.  You can recognize “hitting bottom” when you see acceptance of the dire situation from political leaders, hear honest talk about mistakes made, see proposals of fundamental structural and policy changes to address those mistakes, and hear the “we’re all in it together” ethos expressed with sacrifices expected from all economic classes.  In essence, when you see leadership with credible plans.
A long-term question is, will politicians be able to stand together when economic confidence collapses, or will opportunistic blaming continue?
EUROPEAN OUTCOMES
If European voters express support for closer political union – federalism – in , then the fundamental Euro crisis may gradually be resolved.  But that is unlikely based on the results of the recent election in the German state of Mecklenburg-Vorpommern.  More likely and the Euro will stumble along with more and bigger band-aids.  As anger and frustration rises, political positions polarize and the choices become, by necessity, more extreme and unity less likely.  Democratic voters are easily swayed by mis-information that resonates with their emotional states.  So without steps made towards federalism in , the Eurozone will continue to suffer, and some members may leave (if that were possible).
NEXT STEPS – INVESTING 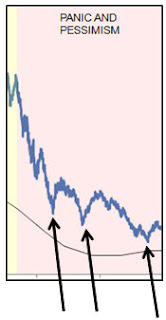 If the crisis leads to a real collapse before the U.S. election of 2012, then look for coherent and forceful leadership before stepping into the equity markets.  Although a big panic that creates values before then is also a good short term opportunity.   Note the image to the left  showing the collapse stage of the Nasdaq bubble - there were a series of short-term panics before the actual bottom was put in.

In particular, look for honesty about past mistakes, significant policy changes to prevent those from happening in the future, and the sharing of fiscal pain across classes.  Also positive would be a stimulus that actually focused on productive investments, not just pork or taxpayer "relief".
The debt spiral and collapse of confidence are unfolding now, and equity and bond markets are likely to be suffering until mid-October.  Consider gold and cash as safe havens (gold can still run dramatically before it peaks).  There is no reason to “buy the dip” at these levels.  There may be more dipping to come.
TRACK RECORD
We're happy to say that our big (and publicized) macro calls, based on sentiment analysis, have been correct in the past 12 months:
1.  We called the market rally from September 2010 through April 2011.
2.  We identified an equity bubble publicly in June 2011 and cited the risk to investors.
3.  Dr. Murtha was on NBR on August 2nd explaining that a major correction is due (the day before the first crack in the markets).
4.  We called a bounce "Turnaround Tuesday" off the Downgrade lows, to be followed by continued selling.
5.  We even threw in a few one week buys during the savagery.  BAC turned out very well, but HPQ lagged the market a bit.

We look forward to discussing these issues further at the webinar!
Happy Investing,
Richard
Posted by Unknown at 3:30 PM No comments: