Downgrade! - The Psychological Terrain of What Comes Next in the Markets 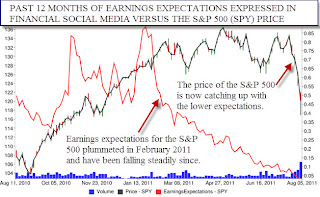 Investors are in the same conundrum as the human brain.  The brain receives more than 1,000,000 sensory inputs every second.  But the brain's owners (us) can't consciously pay attention to each of those inputs.  During the latest crisis, investors are receiving tremendous amounts of information (mostly negative).  How can they possibly make sense of it all?
Fortunately they can turn to the field of neurofinance for answers.

NARRATIVES
The brain's solution to information overload is to craft general feeling impressions and weave those impressions into stories - narratives - that serve as easily memorable summaries.  These narratives provide a concise explanation of what has happened and what to expect going forward.
Over the past three months we've seen investors turn away from a narrative of recovery and towards the narrative of debt default and stagnation.  In the narrative of recovery, large deficits and debts are expected to be repaid through growth - as happened to the U.K.'s debts after WWII.
But burdened by evidence of an economic slowdown, the recovery narrative for Europe and the U.S. collapsed over past three months, culminating in the downgrade of the U.S. AAA debt rating by S&P.
As a result, investors are looking for a new narrative to guide their investing, and what they see is political paralysis (in the U.S.) and political impotence (in Europe) in dealing with the economic issues.
THE DEBT NARRATIVE
The new narrative being adopted by investors - whose readjusted expectations have contributed to the price shocks we've seen over the past two weeks - is focused on the unpayable debt overhang the developed world faces.  And the more it is recognized as unpayable, the more likely it will become unpayable through higher debt service costs - a self-fulfilling prophecy.  That feedback loop is the real danger of the current narrative.  Over the short term, this panic will play itself out, hopefully by mid-week, leading to a short-term (days) rebound which is likely to be prompted by a surprise announcement of QE3 or other government action after hours.  However, long-term we're still in the throes of a fundamental problem with developed world economies - political impotence and excess debt.
EMOTIONAL CLIMATE
Anger is the by-product of the current narrative.  Anger and Fear are qualitatively different.  Fear is about the future and is often an overreaction.  After a spike in fear and a plunge in the market, there is usually a rebound and a return to business as usual.  Anger indicates a more fundamental reassessment of the investment environment.  And now we're facing investor (and social) anger.
WISDOM OF THE CROWD
Based on our linguistic analysis of financial social media, you've seen in the past few blog posts images of very high anger and disgust among investors.  Those emotions are feeding into expectations as well - it appears that investors' earnings expectations have been dropping for some time.  In particular, you can see that expectations of earnings for S&P 500 companies have been slowly declining since February 2011 and are at their lowest level of the past 12 months.  See the chart below: 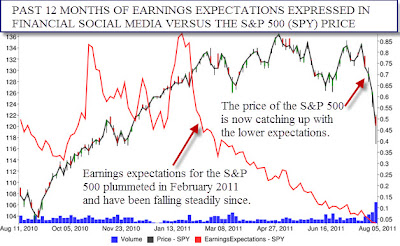 WHAT'S NEXT?
For the short term, there may be a rebound by Tuesday or mid-week.  The way panics tend to play themselves out, we see a follow through sell-off through Monday, then a stabilization, and then "turn-around Tuesday."  So the odds are that we get a little bounce.
But longer term, this selling will continue to play itself out.  There are really two alternatives to how we solve the huge U.S. debt overhang (increased taxes and lower spending are both required, but they still can't address the entire liability overhang).  We can inflate our way out of it (increased spending and QE3), or we can try to improve our balance sheet by cutting spending (fiscal austerity).
Inflation is a stealth tax on everyone, while fiscal austerity is more obvious.  At this juncture, the U.S. is likely to fake fiscal austerity while going the path of inflation.  The U.K. is genuinely going with austerity (as is Ireland and Greece currently).  However, it remains to be seen how long citizens can tolerate slow economic growth due to austerity.  Eventually they are likely to succumb to the desire for short-term needs (jobs) - and vote in politicians who promise to increase spending despite the risks of inflation.  In any case, it promises to be an interesting decade.
If you still doubt that market psychology matters, your doubt is likely to be tested again and again in the coming months.
There are still safe havens for investors - emerging markets such as Brazil, Chile, Peru, and Indonesia, and several African nations are emerging with credible investment environments.
Of course, in the midst of a crisis, we tend to turn away from what is unfamiliar (the familiarity bias) and pull our money closer to home.  In the case of the current crisis, that is likely to be a long-term mistake.
Happy Investing!
Richard L. Peterson, M.D.
Posted by Unknown at 7:25 PM