Dead Turkeys: In the Short Term the Market is Dumb 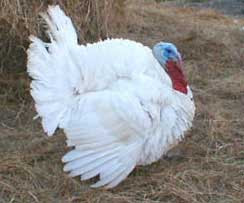 My friend, Ian, once told me a story about domesticated turkeys. You know, the tasty kind. One night, during a loud rain storm the flock became unnerved. The crashing thunder frightened them. The driving rain disoriented them. The terrified poultry ran for cover. Panicked turkey after panicked turkey piled into a shed. Eventually so many crammed themselves in there, the whole flock suffocated.
When the farmer came out the next day he found an entire shed packed with dead turkeys.
(Note: I like to think there was at least one, tragic, non-conformist turkey who upon entering the shed and getting squooshed, began to question the wisdom and tried in vain to rally his turkey brethren., "Stop! Go back! For the love of God, man! This is madness!" In the movie version, "Turkeytanic!", I would give this part to Leonardo DiCaprio.)
If you've read this blog, you know that one of my favorite pastimes is watching the Yahoo Finance headlines change over the course of the day. (It's fun. Seriously. Try it.)
Yesterday, I watched the news that Italian Premier, Silvio Burlasconi would be resigning hit the Market. It caused a 100 point upturn and the media credited the impending change as a catalyst for positive movement.
Today I woke up and saw the following, "Uncertainty over Italy's Future Slams Markets". Money quote:
'"The positive impact of Berlusconi's promised resignation is being diluted by a lack of clarity on where we go from there," said Adam Cole, an analyst at RBC Capital Markets.'
Let me sum this up; The reaction boiled down to, "Hooray! he's gone!" to "Oh, sh*t! He's gone!" overnight.
Which brings me to my point; when we get stuck in a short-term focus - especially when we are hit with unexpected news - the Market is full of dead turkeys.
Our award-winning book, MarketPsych, is dedicated to helping professionals and laypeople alike overcome such pitfalls. And we frequently give talks and workshops on the subject (for more info contact us at info@marketpsych.com).
And my partner, Dr. Richard Peterson's amazing sentiment data over at http://www.marketpsychdata.com/ can give you the tools to not merely avoid mistakes, but help you profit from the folly of others.
We invite you to check out both.
Thanksgiving is coming, people. Don't be a dead turkey.
Happy investing, everyone.
And hey... let's be careful out there.
-Dr. Frankenstocks
Frank Murtha, Ph.D.
Co-founder of MarketPsych
Posted by Frank Murtha, Ph.D. at 5:49 AM No comments: 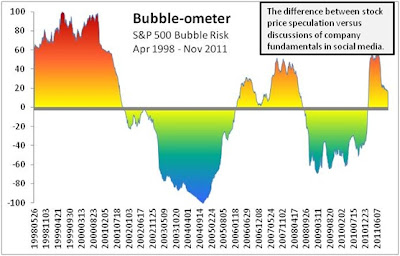 Our Bubble-ometer received coverage in Jason's Zweig's column in today's WSJ.  The Bubble-ometer is hosted on www.marketpsychdata.com, where we have several free tools for investors based on social media sentiment.

The Bubble-ometer is simple in concept but has been predictive since it was developed as seen in these past Bubble-ometer posts:  calling the late 2010 rally and identifying a Bubble top in June 2011.

We're working on a more complex version of the metric as can be seen in the second blog link above, which we're calling the "market risk index."   We're also comparing sectors to identify arbitrage opportunties.  Please sign up for our free monthly newsletter, and we'll keep you posted about these developments.

Happy Investing!
Richard
Posted by Unknown at 8:48 AM No comments: