MarketPsych's first digital film installment on the Facebook IPO from our "Bob and Helen" series for financial advisors.

Link HERE or click on Red Curtain Above.
Also a shout out to Melissa Lee of CNBC for noticing the deja vu of "new metrics" being trotted out in support of Internet stocks. (Nice to know we aren't the only ones who felt it.)
Enjoy.
(Note: It looks like ZNGA is beginning to reward it's shareholders. We wish them well.) 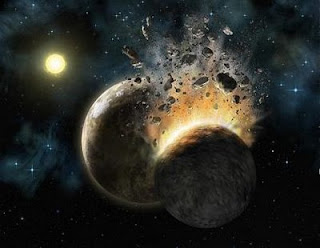 These words came from my brother, Loring, and their significance was unmistakeable – worlds have collided.

My brother is an actor and filmmaker (quite talented too, www.mcquaidbrothers.com, http://twitter.com/loringmurtha). He is about as far removed from the world of investing as one can get. In fact, I suspect he couldn't name more than one holding in his managed portfolio.

But when I mentioned to him the other day that “Facebook is having its IPO. IPO stands for Initial Pub-“ he saved me the trouble, cutting me off with the statement above.

My brother is not an official MarketPsych Sentiment Indicator. We have REAL ones for that. But he might as well be.

It indicates that Facebook's upcoming stock offering is much more than a financial investment. It's a pop-cultural phenomenon - with all that that entails.

In a story that is perhaps apocryphal, Bernard Baruch said that he knew it was time to get out of the market (pre-crash) in 1929 when his shoe shine boy gave him a stock tip.

In a story that is definitely apocryphal, Baruch also said,"By the time your Mom learns the name of the band, they’re no longer cool."

Why? Because it means EVERYBODY knows. Stocks are like "Indie Bands"; part of their appeal is that not EVERYONE is rushing to see them.

By the way, the last time my brother mentioned a stock to me it was Sirius Satellite Radio (SIRI) in 2007. Two years later you could pick up a share of SIRI for a dime. A piece of Bazooka Gum or ownership in the most revolutionary company in radio history? Your choice.

Will that be the fate of Facebook? I hardly think so. But as MarketPsych has long (and correctly) maintained, all stocks prices are the product of the aggregate psychology of the investing community.

What happens to that community when Worlds Collide? When the peaceful, orderly state of Financia is suddenly flooded with wild refugees from the nation of Facebookistan?

Facebook, Social Unrest, and the Predictive Power of Big Data

At MarketPsych we are at the vanguard of social prediction in the financial industry.  We developed predictive models that not only are monitoring the buzz about Facebook, but that use the characteristics of that buzz to predict (and trade) Facebook’s shares.  We have spent decades modeling social data and trading on it - our MarketPsy Long-Short Fund LP was successful in using this data to outperform the S&P 500 by 27% from launch on September 2, 2008 to the end of 2010 (when we closed it).  It’s not only our firm that does this - there is an entire industry of social prediction based on mining behavioral and psychological data.
But we and many of our customers have problems with Big Data – it’s unwieldy and noisy.  Consider that our Macro data feed distributes 30 sentiment and topic data points every minute for major economic sectors and industries (40), Commodities (60), Countries (100), and Currencies (50) in two feeds (one feed derived from social media and one derived from news media).  In case you didn’t do the math yourself (and I hope you didn’t!), we’re releasing 15,000 data points minutely.  This data deluge is actually a summary of our core data.  It is derived from 2 million daily articles, analyzed for the presence of 40,000 entities, and scored into 1600 sentiment and topic combinations – all condensed into the 30 Macro indices to render it “usable” by humans.  Here’s the general idea: 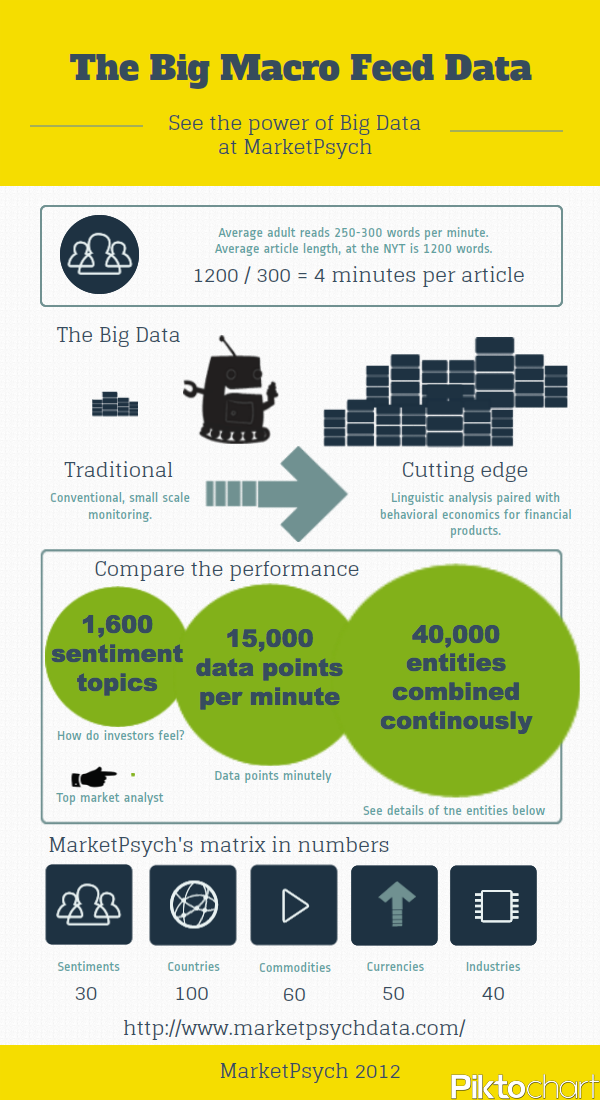 Books
Both books named "Top Financial Books of the Year" by Kiplingers.

Disclaimer
This material is not intended as and does not constitute an offer to sell any securities or a solicitation of any offer to purchase any securities.
The information of the MarketPsych Report is presented free of charge.  It is no substitute for the services of a professional investment advisor.  Investments recommended may not be appropriate for all investors.  Recommendations are made without consideration of your financial sophistication, financial situation, investing time horizon, or risk tolerance.  Readers are urged to consult with their own independent financial advisers with respect to any investment.
Past performance is no guarantee of future results.  Screen and model signals and related analysis are for informational purposes only and should not be construed as an offer to sell or the solicitation of an offer to buy securities.  Most financial instruments (stocks, bonds, funds) carry risk to principal and are not insured by the government.  Anyone using this newsletter for investment purposes does so at his or her own risk.
Data accuracy cannot be guaranteed.  Opinions and analyses included herein are based on sources believed to be reliable and written in good faith, but no representation or warranty, expressed or implied, is made as to their accuracy, completeness, timeliness, or correctness. We are not liable for any errors or inaccuracies, regardless of cause, or for the lack of timeliness of, or for any delay or interruptions in, the transmission thereof to the users.
As a matter of policy, we may act upon the investment information that this newsletter provides prior to making it available to the public.  We do not accept compensation of any kind from any companies mentioned herein.
MarketPsych is not responsible for any special, indirect, incidental, or consequential damages that may result from the use of, or the inability to use, the Information contained on this newsletter whether the Information is provided or otherwise supplied by MarketPsych or anyone else. Notwithstanding the foregoing, in no event shall MarketPsych total liability to you for any and all claims, damages, losses, and causes of action (whether in contract or tort or otherwise) exceed the amount paid by you, if any, for accessing this newsletter.
MarketPsych expressly disclaims all warranties and conditions with regard to the Web sites, their Content, and the Information, including, without limitation, all implied warranties and conditions of merchantability, fitness for a particular purpose, title, and non-infringement. By using the Web site, Content, and Information, I assume all of the risks associated with their use, and I release and agree to indemnify and hold harmless MarketPsych from any and all liability, claims for damages, and losses arising from or connected with such risks.
IF YOU DO NOT AGREE WITH ANY OF THESE TERMS AND CONDITIONS OR FIND ANY OF THEM TO BE UNACCEPTABLE, SIMPLY UNSUBSCRIBE FROM THE EMAIL LIST. If you understand and accept these caveats, feel free to read the newsletter.
Posted by Unknown at 1:13 PM No comments: