Bumping Against the Debt Ceiling: The Psychology of Imminent Default

When I compiled our financial sentiment indices in the mid-2000s, I never imagined I'd spend so much time looking at the "Anger" and "Trust" metrics.  Ah, how the world has changed.

As you can see below, investor anger is at an 18 month high due to the debt ceiling paralysis: 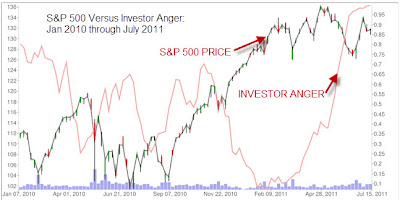 ANGER AND PRICE ACTION
Despite so much anger, we've only just begun to see fear creep into the stock market.  There has been an enormous divergence between investor sentiment (which has become exceptionally negative) and market prices (which have stayed relatively flat).

THE TECH BULL
Part of the reason for flat prices is that more than 80% of the companies reporting 2Q earnings this season have beaten their analyst consensus estimates.  That's incredibly bullish.  Furthermore, there is a party going on in Silicon Valley.  Start-up tech companies are being routinely valued over $10 million, even without a working product.  It feels good to be in coastal California right now.
So now let's talk about what is likely to happen.  How this might play out assuming each side is negotiating from a sincere position (in game theory it is sometimes advantageous to "act crazy" in order to increase one's negotiating clout, as the Tea Partiers may be doing).

U.S. IS LIKELY TO MISS THE DEADLINE
Unfortunately the negative outcome is also the most likely, and the debt ceiling will not be raised by August 2nd.  If this negative event occurs, there are likely to be band-aids applied - an executive order raising the debt ceiling, social security check IOUs redeemable at most banks (as California issued each of the past three years), and interest payments to bond holders that will be paid.

DOOM
Yet there is a sense of foreboding and doom about the negative outcome, precisely because we don't know what it will look like.  (In fact, if you're a contractor for the State of California, you know exactly what it looks like - IOU certificates and long delays in payments).   Since we know some potential outcomes, let's discuss those to dissipate the doom.

DOWNGRADE?
What if there us a ratings downgrade of U.S. Treasuries to AA?
- Based on the regulations for pension funds, banks, etc... to hold AAA Tier 1 assets in part of their portfolio, there simply won't be enough liquid assets for all that money to move into.
- This would necessitate a change in the rules governing "secure" assets.  So fundamentally, very little would happen except a lot of confusion and panic in obscure derivatives markets that we haven't yet heard about.
THE PSYCHOLOGY OF NEGOTIATION
In terms of the negotiations themselves, the psychology has played out such that neither side can back down.  If either backs down, they will lose face with their constituents.  If they both go through with the default, then they can both claim victory (of sorts).  Recall that Tea Partiers were elected to throw perfectly drinkable tea into the ocean - to cause short term pain (refuse a debt ceiling increase) for longer term gain (better fiscal management).  And we're currently seeing Obama's (necessary) second "stand" - healthcare reform was first.  See that graph of Anger above?  Anger causes people to become LESS flexible, not more.
GAME OF CHICKEN
As a result of this angry (and very public) game of chicken, neither side can back down.  So ... missing the August 2nd deadline is quite possible.  "Default" on interest payments is unlikely, but issuance of "IOUs," an executive order based on the 14th amendment, or some other interesting stopgap measure is likely.
IMPASSE, DOWNGRADE, SELLOFF, REBOUND
So expect a downgrade eventually.  Expect a market sell-off.  Then expect a rebound in the short term after the panic.  (The panic in August will be good time to buy for the short term).  Long term we're seeing the symptom of a systemic disease - a disease of the U.S. political system that will not be cured without some type of major surgery.  Let's hope we can find a good surgeon.
SAFE HAVENS FOR $$
Just like the past three years, it is time to park assets in safe havens - not cash or currency, but gold and revenue generating (emerging market bonds and some real estate) and inflation resistant stocks (recall QE3 should be helpful for the mini-bubbles in Silicon Valley: digital media, technology, mobile devices, etc...)
Happy (or at least not Angry) Investing!
Richard L. Peterson, M.D.
Posted by Unknown at 10:05 PM