“The word "forgive," according to the Chambers Dictionary of Etymology, comes from the Old English for-completely + giefan-GIVE.”
~ Jeff Kober

Bob didn’t hit bottom in a dramatic fashion.  As he tells it, he looked in the mirror one morning, and he spied a foreclosure notice out of the corner of his eye.  He looked directly at himself in the mirror and thought, “Who is this guy I’m looking at? I don’t like him!  That’s it, I’m done.”  He thought of the jerk he had become, and he figured that suicide may be the best amends for his sins. Bob went for a walk that morning, pondering whether to end his life.  On the walk Bob bumped into an old trading buddy who had heard about his fall.   The buddy invited him to an Alcoholics Anonymous meeting that night.

At the meeting Bob recounted his story and was amazed that many in the room could relate.  He had spiraled downward driven by forces and compulsions he was only dimly aware of, yet many in the room had parallel stories of self-destructive behavior.  Like others in the room, Bob had poisoned many of his relationships with ego-fueled ambition and narcissism.  Bob realized that his life wasn’t just about him.  And as he looked around the room, and listened to the stories of other alcoholics, he realized that he had hurt many good people.

Bob went home that night made an inventory of everyone he had hurt.   He decided that suicide would be no use if he didn’t at least try to make amends to these people for the pain that he had caused them.

He first called his parents and apologized for virtually destroying the family business.  He explained his realization that he was alcoholic and out of control.  He apologized for past behavior and volunteered to work 80 hour weeks for his family for two years in exchange for room and board.   Eventually they let him come back to work in a minor capacity, but not without testing his sincerity.

As in the quote that opens this section, in order to win redemption from a life of narcissism and petty resentments, one must give completely of himself.  After his fall, Bob spent two years working off his moral debts and maintaining his sobriety.  During this period he regained some social support and mental balance.  With the blessing of his family, he left the business to begin his new career in technology.  Bob started and grew his own technology company.  He has been sober for 15 years, and what’s more, he recently started a happy, healthy family of his own.

We’ll address what Bob did to get out of his rut later in the newsletter.  But first, we’ll look at the case of companies in a slump:  RIMM and Coal.

RIMM management has made a series of blunders that in any other industry besides smart phones would not be so quickly fatal.  But RIMM lost brand credibility and has fallen far behind.  Nonetheless, 10% of the global smart phone market is not a bad place to be if your customers are loyal individuals (or inert corporate clients).  Rumors of RIMM’s demise have been swirling for more than a year and intensified this summer.  But lo and behold, RIMM stock is rising from the ashes.  Is this a value-play or an honest-to-goodness redemption?

Don’t expect RIMM to recapture its former glory.  There has been open dissention and a loss of shared passion.  See this open letter for details.  That said, the leaks appear to have turned positive.  These product development leaks show an impressive pipeline.  Given that expectations are the driver of risk taking among investors (“buy on the rumor”), we could see a continuing rally in RIMM shares until the new phones are released (“sell on the news”).

We have already seen increased Liking of RIMM by online investors.  The green line in the chart below quantifies the amount of Liking expressed about RIMM and RIMM products in the financial social media from Nov 2010 to Nov 2012.  Note that Liking has risen substantially off its lows. 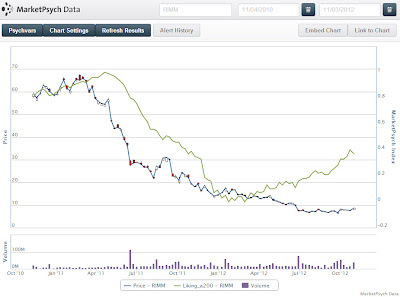 We are also seeing that RIMM is re-emerging among its peers in overall Sentiment.  Note that Microsoft (MSFT) typically drags the floor in sentiment.  Apple (AAPL), which usually rides high in sentiment, had a serious sentiment decline this summer around its price peak, and it is now below Google and RIMM in overall sentiment value.  Meanwhile, Google surged in sentiment following its July 19th 2012 earnings report. 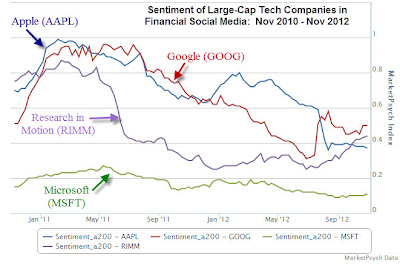 In the case of RIMM, a short-term redemption may finally be at hand.  But the safest way to be involved is to buy the rumor of redemption.  For companies, long term redemption is nearly impossible.  Remember Nokia (NOK)?  Amazingly, the one year Fear and price chart on Nokia looks incredibly similar to that of the Coal industry, below.

The coal industry has been down in the dumps lately due to falling Chinese demand and concerns about climate-related regulation.  “Sandy” is again focusing attention on the human consequences of greenhouse gas build-up, as this Bloomberg cover testifies.    There has been a recent price surge in Coal.  Whatever the cause, the long-term outlook for the coal industry is negative in the U.S.  In the image below there is a recent surge in Fear (green line) in the Coal-industry ETF (KOL) to multi-year highs as the U.S. election approaches, the stock prices hit new lows, and more utilities turn to natural gas. 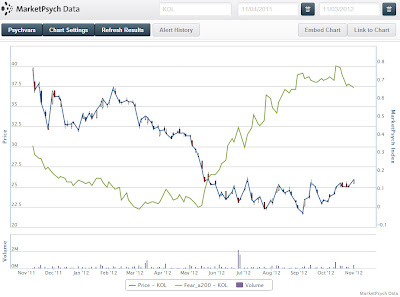 I’m not endorsing a long-term coal investment.  But from a contrarian point of view, coal is certainly interesting.  And some U.S. stocks like BTU have good cash positions and are exporters.

Is “redemption” likely for the coal industry?  No.  Coal is a chief culprit for global warming and mercury in seafood, and it’s unlikely to become less regulated or more favored anytime soon.

Just as with athletes, investors will eventually, and often repeatedly, experience slumps in performance.  On the psychological level slumps dent confidence, paralyze decision making, and impair risk assessment.  During a slump personal balance is lost, and impulsive risk-taking alternates with paralysis.  On the biological level, negative feelings are seared into the amygdala, changing how we remember, assess, and respond to future risks.  The long-term consequence of a deep slump is a kind of financial post-traumatic stress disorder (PTSD) in which our decisions about risk can become permanently distorted.  For someone like Bob, alcohol and cocaine numb the despair associated with a slump.  But these chemicals also biologically impair resilience mechanisms, resulting in a steep downward spiral of interrupted sleep, impulsive behavior, and an eventual blow-up.

Once in a slump, climbing out is not quick or easy.  There are two analogies applicable to investors in a performance dip, one from baseball and one from golf.  Ted Williams of baseball fame once said the key to great hitting is to wait for your pitch.  Baseball success is associated with a rapid assessment of the ball’s trajectory and a snap judgment of “yes” or “no.”  But unlike baseball, a golf ball waits for you to hit it.  As a result, golf is about deliberation, practice, and precision.  Tiger Woods took a year off professional golf to readjust his golf swing.  The key to getting out of a slump is to climb out one successful trade at a time – one perfect swing at one perfectly placed pitch – to rebuild confidence and motivation.

Working out of a slump requires 1) accepting the slump for what it is, 2) focusing on what works in the current environment, 3) jettisoning what (and who) doesn’t help, 4) readjusting your perspective to one that supports profitability, and 5) waiting for YOUR PITCH.  Unfortunately for resentful investors, it is situations like this year – when markets rally on persistent gloom – that they are again traumatized.  As a result most investors have been missing out on a bull market.

So how do we stay flexible in today’s volatile markets?

Mental adaptability is the most significant trait behind investor success that we’ve identified in our online personality tests.  There is a method in the challenge of climbing out of a rut, and it is rooted in using your mental flexibility to ask good questions and try to see things differently than the status quo.

If you’re in a slump now, get out a pen and paper and go through the following steps for yourself:
1.     Admit you are struggling.  It’s OK to struggle.  Everyone struggles at times -- it’s called life.  Write down what you are struggling with.
2.     Now look back at your biggest failures in the past.  How did you fare afterwards?  Odds are you rallied back.  That wasn’t an accident.  You were able to find the strength within and/or take advantage of help from others.  Can you identify what turned it around for you?  What did you do to speed up the comeback?
3.     Now think about today.  Where have you been getting bad advice, useless information, or suffering from negative influences?
4.     Then look within yourself – which habits of yours are keeping you muddled:  Bad sleep habits?  Alcohol use?  Not exercising regularly?  Family or co-worker conflict?
5.     In your investing, figure out what is working for you or others in the current environment.  Write it down in detail.  Then look at what you are doing that isn’t working, and ask yourself, how can I do more of what is working and less of what is not?
6.     Now look at your current investments.  List objective factors about them.   Identify the investment convictions you hold and be clear about how your convictions could be proven wrong – price action is not the best proxy, but changes in fundamental conditions are.
7.     Feedback in investing should be around the process, and sticking to the process, not outcomes.  Make sure you evaluate your thesis on long-term, not short-term, outcomes.  And keep in mind that a bad economy does not necessarily mean negative asset returns.  Write down your process, and look for how it can be improved.

The guidelines above are not a silver bullet, but they should provide a solid start.

Next week we will explore how to read the indicators of when a company, country, or investment has what it takes to pull out of a slump…

Week ahead:  We’re still seeing a mild buy on the S&P 500 this week, which may be due to pent up tension due to the upcoming election.  We’re also seeing a one-week short on Netflix (NFLX) due to lots of love following a good earnings report (overreaction), and a one-week short on Exelon (EXC) which despite a recent price drop, is seeing signs of denial among investors who continue to like the high dividend and low P/E ratio.  (See Disclaimer below).

We recently launched the Thomson Reuters MarketPsych Indices for monitoring market psychology for 30 currencies, 50 commodities, 120 countries, and 40 equity sectors and industries in social and news media.

In the next month we will be speaking in New York at Quant Invest and our Chief Data Scientist, Aleksander Fafula Ph.D., is speaking at Predictive Analytics World  in London.
We have speaking and training availability.  Please contact Derek Sweeney at the Sweeney Agency to book us: Derek@thesweeneyagency.com, +1-866-727-7555.

We hope you found the letter this week interesting and useful!  We always love to hear your thoughts and suggestions for future newsletters, so please don't hesitate to reach out.