Slugs and Sugar: Gender Effects on Investing and Nokia

'Honey, what happened to our retirement savings?'

If you're a man, your partner may have asked you this at some point in the past few years.

'Hmmm, I'm not sure what you mean?' you may evasively answer.  (The truth is, you're very aware that you invested too much in that awesome small cap tech stock.  Sure it's down 50% since you bought in, but it is such a GREAT story, it HAS to work out.)

She persists, 'I mean, how come the account has less money than last year?  The market was up this year.'

Now if you're like most men, you want to please your wife (and yourself).  And you probably believe what you say next:  'Um, well, I invested in CyberNanoTech and they had a bit of a setback this year because of the FDA, but their long term prospects are amazing, everyone says so, so I’m holding tight.'

'Well, Joey at the Club was saying they have this world changing….'

'Honey, what does Joey know about investing, isn’t he an orthodontist?'

This is why men need wives, to pop their unreality bubbles.

It's at this point in the conversation that his wife may pick up the phone to call a financial advisor.   And if all goes according to her plan, which is likely, their financial relationship dynamics will become the domain of a financial advisor, which is another story (and one I often speak to advisors about).

The above parable is an amalgam of stories I've heard from most of my male friends.  As investing sterotypes go, women tend to be more prudent and men the risk-takers.  As we'll see in this letter, the type of risk-taking men do often doesn't work out well, especially when the men involved are amateur investors (which, despite their winning personal assessments, most men are).

After we review of the mistakes that amateur investor men (and women) predominantly make, we’ll look at the research behind that.  Then we'll look at evidence of the role of women in keeping public debt levels low, but also in driving firm valuations lower.  We also consider a report on the sensitivity of female risk taking to the menstrual cycle.  In conclusion we'll integrate the various findings to see if there are any lessons for Wall Street and our society.

Note:  if you haven't already, please take one of our free online personality tests before reading on.  You'll be in good company, over 20,000 people have taken at least one of our tests.

In our Trader Personality Test results we see that women traders do not differ substantially from men in terms of performance and volatility.  Professional traders – both men and women – must stay disciplined and with proper risk management in order to survive in the business.  Good discipline is a prerequisite to successful trading.

Among people who have taken our Investor's Personality Test, we see a different phenomenon – women vastly outperforming men.  Our Trader's and Investor’s Personality Tests are differentiated by the average length of holding time for positions – in the case of investors, 3 months or longer.  For investors we see that gender is the most powerful explanatory variable (after experience) in dictating market returns.

In this study we examined investors who took our Investor's Personality Test from 2005-2010.  After removing those with less than five years experience, from countries without developed financial markets, those who gave repetitive answers, and those beyond the age bounds 25-80 years old we had 2,600 results left.  Follow this link to take the test if you haven’t already.  Nineteen percent (19%) of the final sample were women.   All test-takers had reported their  largest historical drawdown and their past five years investing returns.

Women reported much higher five year returns than men.  Further, women reported much lower average lifetime drawdowns.  Women risked less than men yet were more profitable according to these results.
In order to understand how women’s profits were so much greater, we looked at gender differences in the individual bias questions in our tests.  In general women reported being more self-disciplined, grounded, and emotionally aware.

When you think about it, these responses could be a bit problematic.  Bringing ego into investing by taking revenge on markets or other traders or seeking pride through successful trading leads is far from the rational analysis preferred by successful investors.

To be clear about the limitations of the simple study we did, there is self-report bias in our sample, in which people rate themselves based on their opinions.  Based on cultural and perhaps competitive pressures, men are more likely to exaggerate their risk tolerance.  This study shows that women do take less investment risk than men.  At the same time women also under-report their risk tolerance.  To look into others' research on gender-specific investing behavior, we turn to a classic study.

Reseacher's Corner:  Boys Will Be Boys

Our performance results – showing men outperforming women - are congruent with those reported by Brad Barber and Terry Odean at the University of California at Berkeley.   In a study of 35,000 brokerage accounts between 1991 and 1997.  The authors found that women had 45% less portfolio turnover and 1.4% greater average annual returns versus male investors.   To be clear, both men and women underperformed the stock index, but men underperformed more.

John Coates, whose work we profiled last week, cites evidence that women change their risk taking to be more like that of men when given testosterone.  Coates speculates that bringing more women onto the trading floor may improve returns:

[T]here are grounds for thinking that women may be less ‘hormonally reactive’ when it comes to financial risk-taking. For example, women have only 5–10% of the circulating levels of testosterone of men, and they have not been exposed to the same organizing effects of pre-natal androgens. Furthermore, some studies have found that women's HPA axes are less reactive to stressors stemming from a competitive situation (Stroud et al. 2002). Their greater presence in the ranks of money managers may therefore help dampen hormonal swings in the market.  (Coates, 2010)

In a blog post, Brad Barber (co-author of the study above) indicates that women tend to be more focused on planning and wealth preservation while men are more competitive and focused on growing capital.
As in the above, there are general conclusions to be drawn from research about female traders and investors, but as we dive deeper into the specifics of how men and women are affected by their biology and how they perform in leadership groups, the plot thickens.

The question remains, if women are such good long-term financial decision makers, why are so few women in top investment positions?  The answer to this question is not clear, although hypotheses are many.  Some have hypothesized that there are some additional factors at play among the very elite in the field (as Larry Summers famously did regarding women and math, precipitating his removal from the presidency of Harvard).  Others believe that many women don’t find the political game of rising to the top of an investment firm as rewarding as men typically do.  While ego and pride appear to disproportionately hurt men’s investment performance, perhaps these same factors help men succeed in competitive business environments (where their performance cannot easily be judged quantitatively).

While there are no easy answers for Wall Street leadership positions, we do see that greater female presence in government leadership correlates with the financial health of a country.

Given the above findings – that men enjoy revenge (and it correlates with lower investment returns), that men think they are better investors than they actually are, and that men are more likely to take catastrophic financial risks – it would make sense that parliaments with a higher proportion of men would experience more gridlock, higher debt, and a worse investment track record.

In order to study this hypothesis, I first selected 18 long-term developed countries including western European democracies, the USA, Canada, Australia, and Japan. 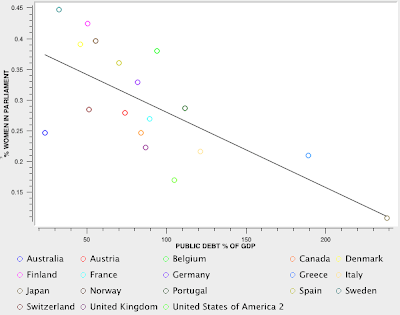 Using data on the percentage of parliamentarians who are women from this list, I selected out 18 Western democracies.  Then using list of national public debt to GDP from Wikipedia, I ran a simple correlation.  It turns out that the more women in parliament, the lower the national debt to GDP ratio (R=0.7).  When the two outliers are removed (e.g., Japan), the correlation remains 0.7.  Perhaps men are taking more short term financial risks, while women are perhaps modulating the risk taking and keeping resources secure for future generations.

It wouldn’t surprise me if the male propensity to ego-involvement, seeking pride, feeling less stress despite high risks, testosterone-driven competition, and greater risk taking are behind the U.S. fiscal cliff debacle.  Perhaps the solution is to bring more women into the U.S. Congress.  But that said, I’m no fan of mandates, and my inclination to avoid mandates is backed up by global evidence from corporate governance ratios.

Is the answer to men's poor performance to mandate more women in government and investment leadership positions?  The preliminary evidence indicates that mandates (at least for Boards of Directors) are a bad idea.  Studies on Norwegian firms, U.S. firms, and Indonesian firms found that increased female representation on the board of directors decreased long term company value.

Another interesting aspect of women's role in investing decisions regards unstable risk taking.  The menstrual cycle appears to change how women deal with risky situations.  While men may be more hormonally reactive to specific external events and competitive pressures, women have an internal hormonal cycle that significantly alters their risk-taking and emotional state.  Phases of the menstrual cycle correlate with different risk taking in this study and this one but not this one.  The differences that are found may be traced to both the phase of the menstrual cycle and the resultant hormone-modulated neural activity in the brain.
So while mandating more women in certain positions seems like a good idea, there is a lot we don't understand.

So far we've seen that women have higher overall investment returns and take lower overall risk.  The higher performance of women versus men appears to be due to enhanced emotional self-awareness and less ego involvement in investing  (less cutting winner short - seeking pride – and less revenge-trading).   Further, we see that Western countries with more women in parliaments have lower public debt to GDP and appear to think longer term about the nation's finances.  But the evidence in favor of more women in financial industry leadership is not conclusive.

We also see that bringing more women into corporate governance reduces firm returns (a global phenomenon).  Additionally, women are more susceptible to the effects of hormonal shifts during their menstrual cycle – those endogenous hormonal shifts significantly alter women’s risk preferences and risk taking.  Given all of the above information, when asked if women should be more represented in Wall Street leadership positions, the conclusion has to be an anti-climactic cop-out … it's not clear.

Trading recap from last week:  Our one-week buy on DryShips (DRYS) was up 1%, and the one-week short on InterOil Corp (IOC) also made money, as that stock was down 6.5%.  Our medium term picks of RIMM and KOL (Coal industry) are moving along, with RIMM now up more than 20% from our recommendation, but KOL is still floundering.

Week ahead:  We have two short term calls:  A short on Nokia (NOK) for the next week. Nokia has run up far, fast, but it appears the short term exuberance has run ahead of itself.  We’re seeing a one week buy on Diamond Foods (DMND) which had a stock price plummet and is now buffeted by extreme negativity in social media.

While short-term strategies are the easiest to find with sentiment data, we’d really prefer to offer longer term strategies, and we think we’ve found some.  We’re putting them online soon, and I’ll be discussing more macro calls (and fewer short term ones) in later newsletters.

Happy Investing!
Richard
Posted by Unknown at 11:33 AM