The Happiest Day of the Year and China Bottoming

"During holidays, [Norman Vincent] Peale once suggested, you should make ‘a deliberate effort to speak hopefully about everything.’"
~ Oliver Burkeman

Our in-house psychologist - Dr. Frank Murtha – recently asked me, "You’ve got all this data on emotions so tell me, what’s the Happiest Day of the year? And as a matter of fact, what’s the Angriest Day?  And the Most Pessimistic Day?"

I had no idea.  Based on work by Aleksander Fafula, our data genius, we know the happiest month is January (when we control for holiday greetings) and the Angriest month is September.   But days?  We hadn’t thought to look.

To investigate, we ran an analysis using the Thomson Reuters MarketPsych Indices social media-based sentiment indices for the SP 500.  These indices cover every year from 1998 through November 2012.

What did we find?  First of all, and fortunately, the next few weeks don’t contain extremely Angry or Pessimistic days.  The next 3 weeks do, however, contain the Happiest and the Most Optimistic Days.  Norman Vincent Peale's advice has possibly been taken to heart, but perhaps more for unconscious biological reasons (seasonal neurochemical and hormonal shifts) rather than people consciously taking Peale's words to heart (the advice itself is useless).

Interestingly, over periods of weeks we see clusters of days or weeks being generally of the same emotional state.  When we look at weekly patterns alone, we see that investors express the most Joy and Optimism in the first week of January (approximately 3rd through 6th), with the second week of January close behind.  Also important, Gloom, Anger, and Fear levels are the lowest during those weeks - not only are positive emotions high, but negative emotions are low.  In summary, investors are generally happiest at the beginning of the year, when enjoying a fresh start (perhaps this has something to do with the January Effect in stock markets)

For specific days, the 23rd of December is the Most Joyful (today!!!), and January 9th is the Most Optimistic.  Note that market holidays are excluded from the analysis.

So… we hope you have been enjoying Financial Happiness Day today!

In honor of Financial Happiness Day (and the Fiscal Cliff), check out Dr. Murtha’s zany video spoofing the struggles of financial advisors around the fiscal cliff with our old friends, Bob (an individual investor) and his financial advisor Helen.

But now on to more serious matters…


Chinese investors are especially happy today.  The Chinese indexes have gone vertical in the past 3 weeks (up 10%).  And while stock market bottoming is usually a long process, China’s market seems to have decided that the coast is clear.

"China?" you say, "but that market is full of corrupt and obscure accounting practices, banks stuffed with non-performingpolitically-driven loans, and state-owned companies."  Yes, those are all problems for Chinese equities, but in today’s newsletter we’ll also look at some positives for China, including sentiment indicators such as higher Fear levels than peers.  And we’ll look for stocks that are good long term buys in China.


China’s economic growth rate has been nothing short of spectacular.  While in 1963 China was the 12th poorest country in the world per capita, lying between Somalia and Burundi in the rankings, by 2012 China is in the middle of the economic pile.  China emerged from a centuries-long slump, but it wasn’t without the exercise of State power.  While many State programs were epic failures (e.g., the Great Leap Forward), many more have been successful (e.g., the development of high speed railways and transportation networks and the most prolific industrial and manufacturing base on the planet).


I bring up State power because in China the State has directed many immensely beneficial projects, and there are indications that the State may be now serious about developing the equity markets to international standards.

Social media has been fairly positive on China generally over the past three years, but the trend is down.  Optimism (future-looking sentiment) about China expressed in social media, while well above the U.S. and Eurozone, is essentially on par with Japan and is lower than South Korea.  See figure below:

In our quantitative studies with Optimism and Equity sectors and industries, we find that changes in Optimism are usually more significant in their impact than the net level.  In the example above, the decline in Chinese Optimism reflects the decline in Chinese share prices. As we continue to study sentiment indices and national economic development and stock market returns, we will explain more of what our findings mean for the future.

In another study we found that Fear about China is quite high, second to the Eurozone of the nations and regions depicted (see chart below). 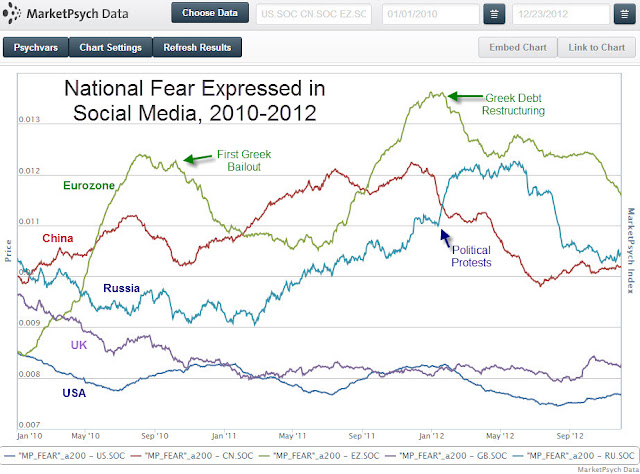 That is, there is significant anxiety expressed in English language social media about China.  Despite overall Optimism about China’s future, this is tempered by Fear that China’s rise comes with risks.

When we analyze currency price forecasts, we see that the consensus for China’s Yuan is that it will rise, although the consensus has begun to unravel in the past year (see chart below, note that the colors denoting each country changed).  The Yuan revaluation consensus is falling as it becomes clear that Chinese inflation is reducing some industrial competitive advantages, and money is moving out of China, as wealthy investors and successful companies sell Yuan to buy overseas assets. 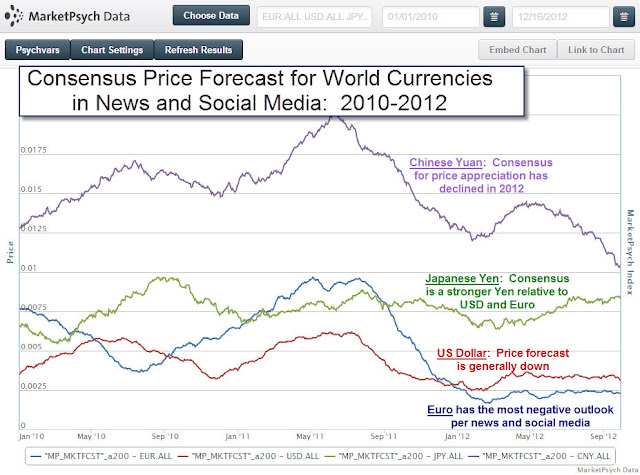 What does the consensus mean for us?  First, when we’ve had a long period of extreme consensus in the markets, and the consensus begins to shift, it takes time for investors to readjust their expectations and for the new reality is reflected in prices.

Being contrarian by nature, I tend to believe that the consensus is priced in.  But being an empirical being, I’ve tried to prove this statistically.  We’ve done some quick studies on whether future expectations can predict prices.  We find that large short-term changes in future expectations have a lagged impact and do often precede price changes.  This finding is only true for social media.  News tends to report the safe opinion, which is usually an extrapolation of what already happened, while social media is more useful in our research.

Since 2007 the Chinese stock market has been in a slump.  We predicted as far back as 2000 that there would be a massive Buy on the Rumor, Sell on the News pattern around the Beijing Olympics with Chinese indexes rising into summer 2008 and then falling after the Games were held.  Our timing was off (by a year!), but the general pattern held.  The markets recently hit three-year lows (before rebounding 10% the first two weeks of December).

The China Securities Regulatory Commission (CSRC) indicated on November 30, 2012 that a stable stock market is in the national interest.  And we know from recent history that when the Chinese government sets a goal, it usually achieves it.  There is also some momentum behind reforms of the Chinese financial markets.  We’re seeing historically low Chinese stock valuations (P/E ratios), the emergence of Chinese financial products such as mutual funds, Chinese real estate prices plateauing, and some world-changing companies emerging out of China.

Is it time to get back into Chinese stocks?

Ah, but of course there is always a contrary opinion.  Many local and international investors are worried about the high levels of state ownership of shares (as this excellent article explains).  There is an unresolved conflict between U.S. accounting rules and the requirement of U.S.-listed State-owned Chinese ADRs to reveal their internal numbers (which are State secrets per Chinese law).   And don’t forget that many U.S.-listed Chinese stocks had fraudulent accounting detected by our social media Alerts in our June 2011 newsletter.  Bank stocks have low P/Es due to an accumulation of non-performing politically-motivated loans, and when they are removed from the Shanghai index, P/E ratios are actually fairly high – above 20.

Given the weight of the evidence, I think China is forming a bottom around 2,000, and from here we’re likely to see positive reforms to root our fraud and fix a broken equities market.  So is it time to buy?  As in every situation, one must look carefully for the companies of the future and select carefully.

Trading recap from last newsletter:  Our two trades from our prior newsletter both did well, despite the S&P 500 falling slightly.  The one-week buys on Intel (INTC) and Freeport McMoran (FCX) were profitable as INTC rose 2% and FCX rose 5% on the week.

Week ahead:   Our trades this week are low conviction.  We’re seeing a one week buy on Decker Outdoors (DECK), maker of Ugg boots, which haven’t been selling well.  The stock has sold off dramatically on fear that the Ugg fad has passed, which appears to be a short term over-reaction.  We see a one-week short on the Chinese ADR Trina Solar (TSL).  There is substantial liking of this stock, which is short-term concerning and indicates a sell.  (Note the Disclaimer).

Regarding China, I'm going to be wishy-washy.  Things change fast in China, and I'm not a fundamental nor a Chinese analyst.  Using sentiment scores it is clear that some U.S.-listed Chinese ADRs such as Netease (NTES) and Renren (RENN) have sold off on delisting and fraud fears, and now may be a good time to consider entering on the U.S. side (keep in mind those shares may actually delist over the long-term, given accounting rule uncertainties).  We have no Chinese stock positions currently, and while I’m hopeful about reform and buying quality companies on dips, I see the sentiment in the charts above pointing to greater values in Europe right now, especially as Europe pulls back from the cliff this year.  In January we will look at opportunities in the Eurozone.

Next week we will release our yearly forecast for 2013, where we will profile the most optimistic and pessimistic equities of the year with expected underperformance and outperformance respectively.  Our track record looks good based on backtesting and our 2012 picks...

We launched the Thomson Reuters MarketPsych Indices for monitoring market psychology for 30 currencies, 50 commodities, 120 countries, and 40 equity sectors and industries in social and news media.

We have a number of Spring 2013 speaking engagements in New York, London, Toronto, and Boston – we will provide locations and venues as the dates come closer.

We love to chat with our readers about their experience with psychology in the markets - we look forward to hearing from you!  We especially love interesting stories or your or others experiences.

We have speaking and training availability.  Please contact Derek Sweeney at the Sweeney Agency to book us: Derek@thesweeneyagency.com, +1-866-727-7555